To share your memory on the wall of John Norman, sign in using one of the following options:

To send flowers to the family or plant a tree in memory of John A. Norman, please visit our Heartfelt Sympathies Store.

We encourage you to share your most beloved memories of John here, so that the family and other loved ones can always see it. You can upload cherished photographs, or share your favorite stories, and can even comment on those shared by others.

Nancy Kramer sent flowers to the family of John A. Norman.
Show you care by sending flowers

Flowers were purchased for the family of John Norman. Send Flowers

Posted Jul 11, 2019 at 04:37pm
Sending heartfelt sympathies to you all during these difficult times. Life is quite the journey. Love, Jojean Freeburg
Comment Share
Share via:
SE

Posted Jun 28, 2019 at 07:43pm
Will never forget the Normans living across the street from us! Remembering sitting on the front steps watching the bats overhead ! Rest in peace, John! ❤

Posted Jun 27, 2019 at 06:46pm
Virginia--I express my deepest sympathy to you and your family upon John's passing away. I remember your family and Ole from the school in Everly. I know that you will miss John but am assured that you will see him again!! Warmly, Marilyn Meyer
Comment Share
Share via: 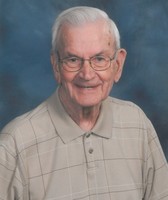