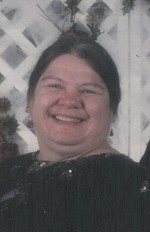 DONNA LOU WILLIAMS
Donna Lou Williams, 62, of Platte City, MO, passed away at the Hillview Nursing & Rehabilitation Center in Platte City. Donna was born October 18, 1957 in Leavenworth, KS to Robert Earl and Dorothy Lee (Goodlet) Williams. She was a lifelong resident of Platte City and attended the Platte County R-III Schools. Donna worked as a night auditor for Marriott Hotels near the airport, in K.C., MO, retiring around 2008. She enjoyed doing needlework in her spare time. Donna was preceded in death by her grandparents; and her father. She is survived by her mother Dorothy and several cousins. Cremation will take place and anyone who wishes to give a memorial contribution in Donna’s memory, can give to the charity of one’s choice. Arrangements By: Rollins Funeral Home—Platte City, MO—Ph. 816.858.2129 www.rollinsfuneralhome.net

All rights reserved. This obituary is also archived at obittree.com