To share your memory on the wall of Evelyn Miller, sign in using one of the following options:

To send flowers to the family or plant a tree in memory of Evelyn Miller (Kisker), please visit our Heartfelt Sympathies Store.

We encourage you to share your most beloved memories of Evelyn here, so that the family and other loved ones can always see it. You can upload cherished photographs, or share your favorite stories, and can even comment on those shared by others.

Posted Mar 19, 2020 at 12:10am
This is from George and Jeanette Ashley in St. James, MO. We have such fond memories of Evelyn's children and their spouses and of her grandchildren. It was a blessing and an honor to have them in our lives during our years teaching in the Weston schools.
Our thoughts and prayers are with you and your extended family during this time.
Comment Share
Share via:
SC

Posted Mar 09, 2020 at 09:11pm
Being with Evelyn kept my mother and my Aunt Lela alive in my heart long after both were gone. She will leave a hole in that heart but remain in it forever.
Comment Share
Share via:
MB

Posted Mar 05, 2020 at 09:01pm
Welcome Home, Evelyn. I’m glad I got to care for you and visit you later. I’m sure our friend, Clarie, was one of the many in heaven to welcome you home. Your family is in my prayers. God bless you all.
Comment Share
Share via:
HS

Blooming Garden Basket was purchased for the family of Evelyn Miller. Send Flowers

Flowers were purchased for the family of Evelyn Miller. Send Flowers 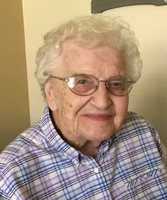