To share your memory on the wall of Laveta Goodlet, sign in using one of the following options:

To send flowers to the family or plant a tree in memory of Laveta Mae Goodlet, please visit our Heartfelt Sympathies Store.

We encourage you to share your most beloved memories of Laveta here, so that the family and other loved ones can always see it. You can upload cherished photographs, or share your favorite stories, and can even comment on those shared by others.

Ed and Laurie Dimitry and Bonnie Goodlet, Ralph and Barbara Stubbs sent flowers to the family of Laveta Mae Goodlet.
Show you care by sending flowers

Posted Jan 10, 2021 at 01:11am
Roger and Family, we are so sorry to hear about the passing of your mother, Laveta. Eternal rest grant unto her O Lord, may she rest in peace. Amen.

Posted Dec 08, 2020 at 04:09pm
She was such a fine lady. I'll always remember her smiling face as a teller at the bank.
Comment Share
Share via:

Posted Nov 15, 2020 at 08:20pm
Laveta Mae, a sweet lady of many talents and always ready to share with others . Both you and Glenn were a lot of fun and I am so glad we were able to visit and later support each other while helping our cousin in her later years. I am sure you are enjoying your reunion with your precious Glen and other family members.
Comment Share
Share via:
MB

Posted Nov 14, 2020 at 03:17pm
LaVeta Mae was a wonderful neighbor on Washington St. John & I felt so honored to live next door to them. Glenn & LaVeta Mae would do anything for their neighbors. Their produce was particularly wonderful. Our special condolences to Roger, Sandy & Nathan. Special prayers for a wonderful lady. Love, Julie & John Pasley
Comment Share
Share via: 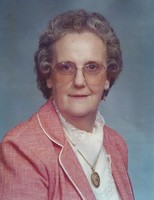