To share your memory on the wall of Ruth DeSelms, sign in using one of the following options:

To send flowers to the family or plant a tree in memory of Ruth Ann DeSelms (Lautzenhiser), please visit our Heartfelt Sympathies Store.

We encourage you to share your most beloved memories of Ruth here, so that the family and other loved ones can always see it. You can upload cherished photographs, or share your favorite stories, and can even comment on those shared by others.

Posted Jan 29, 2021 at 06:11pm
So sorry to hear of Ruth's passing. She was an exceptional lady. May you find comfort in your memories. RIP Ruth.
Comment Share
Share via:
VM

Posted Jan 29, 2021 at 08:08am
I am so sorry to hear of the passing of Ruth Ann. Her daughter and I grew up together, went to school and church together. I spent many nights at their house growing up. I will always have wonderful memories of her. May God bless her family and give them strength and peace in the coming days.
Valerie McClurg
Comment Share
Share via:
JM

Posted Jan 27, 2021 at 12:00pm
Wishing you beautiful memories and wishing you peace and comfort, she will live in your heart forever. When two hearts touch they become one!

Posted Jan 27, 2021 at 11:09am
To all of Ruth Ann's beloved Family, We love you and are praying that the Lord wraps you in His Arms and carries you through this time of grief.

Gracious Lavender Basket was purchased for the family of Ruth DeSelms. Send Flowers 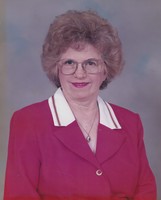