To share your memory on the wall of Ruth Sampson, sign in using one of the following options:

Provide comfort for the family of Ruth Sampson with a meaningful gesture of sympathy.

We encourage you to share your most beloved memories of Ruth here, so that the family and other loved ones can always see it. You can upload cherished photographs, or share your favorite stories, and can even comment on those shared by others.

Posted Nov 22, 2019 at 02:25pm
Ruth was a friend I met working for our dear friend Jack Swaney. She always sent wonderful cards to me and my family even after leaving Platte City and moving to Colorado. She was a sweet caring soul. Love, Carol Gair
Comment Share
Share via:
DO

Posted Nov 16, 2019 at 11:43am
Ruthy's memory leaves no doubt - that she loved The Lord Jesus Christ.  Ruth suffered the debilitating effects of Parkinson's disease.  A few years ago, we all marveled at her volunteering for Darrell Willson's "Changing Hearts Crusade" Choir.  While others were standing, Ruth sang her heart out while Christie Coffer turned the pages - unforgettable!  Ruth's devoted sister - May Perry-Daulton Garcia continued caring  for Ruth's needs although in far off in Texas.  Finally, many FCCPC Members will recall Ruth's warm comments at Sunday Service invitations, "Are there any joys to share this morning?" We've been blessed knowing this very special lady.  God bless,    David Olsen,   Platte City
Comment Share
Share via: 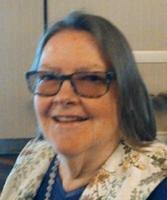